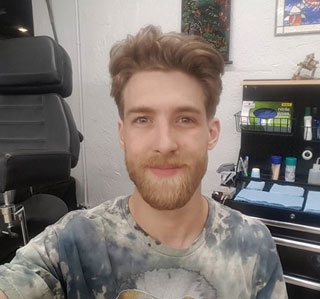 J. is a second-generation tattooer from Philadelphia. His father was his mentor in the tattoo industry, and owned three tattoo studios in the greater Philadelphia area called “The InkWell”. At seven years old, J. started working in his father’s shops, and did his first tattoo on his thirteenth birthday, in 2001. Following his father’s retirement, he opened his own shop, “Soul to Skin” in 2012.

Aside from his passion for Philly sports, J. loves the natural world. Following this passion, and a desire to see more than the East Coast, he sold his shop in 2016. He and his wife converted a van into Rover the RV, and they hit the road! He tattooed all over the country and immersed himself in many different environments along the way, arriving in San Diego in June 2017. As the “Resident Guest Artist”, the Funhouse Tattoo International Guesthouse is the new home base for his continuing travels.

His work reflects his love of nature. Endangered plants and animals are the of his “Holocene Project”, but he enjoys anything and everything with a natural theme. The organic shapes and textures are chosen based on the feelings the client wishes to capture, and designed for the shape of the body part they wish to decorate. It’s not just nature you’ll find in his portfolio, though, as he’s excited by illustrated body art of all kinds! Talk to him about building a piece that tells your story! 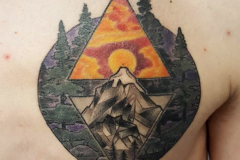